I’ve been writing, just not here. I’m feeling compelled to write something about Baltimore. Until I do, or if I don’t, I’m going to leave this here:

Yesterday the Charleston City Paper in Charleston, South Carolina, ran a story about a planned protest on the Ravenel Bridge. According to the press release the paper published, protesters planned to block traffic until police intervened. The press release was later retracted and the protest cancelled.

The comments section of the article is full of white people who just don’t understand why activists would use this disruptive tactic. Reading the comments is an exercise in witnessing white privilege, ignorance, and outrage. There’s an accusation of reverse racism, as if that’s a thing that exists. There’s a lot of “don’t inconvenience me” sentiment, which seems callous given a man was murdered by a police officer. There’s also a lot of “this won’t do anything but piss people off and make them want to hurt you” sentiment, which is malevolent and dangerous, given that a man was murdered. One commenter suggests that police should “jump out” at the protesters, which is problematic because here is what a jump-out is. More than one commenter threatened to run protesters over. There’s this one:

Annoying. The murderer has been arrested and charged. There is no injustice here as there were in other cases. Standing in road during rush hour is asking to get run over.

What this man is saying is that the murder itself wasn’t the injustice. The only injustice would be if the officer wasn’t held accountable. That’s a fairly shallow reading of injustice.

It’s tiring, looking at this shit. And they all believe that their sentiments are rational. And I suppose they are, if your moral compass points directly at yourself and your family and whether or not you are inconvenienced, or if you really have failed to understand history.

Because here’s the thing. This extreme violence and dehumanization against Black Americans that’s being witnessed by the masses is not new. The United States was built on similar violence and dehumanization. Black people in the geographical space that has become the United States of America have been killed and terrorized by white authority and white populations since before the country was founded.

I don’t know what it’s going to take for middle-class white people to begin to empathize outside of their demographic. The standard response of white people who felt threatened by the protest is not only racist, but classist. It’s classist because, in its outrage, it fails to acknowledge the privilege involved in driving a car to and from work, or elsewhere.

It’s tiring, looking at this shit. Witnessing these reactions yesterday just drained vitality and joie de vivre from me. It emotionally exhausted me and left me feeling physically tired, my heart rate increased. And that’s white privilege working, too. See, my reaction is still rooted in naivete. I can’t say that I was surprised by these comments at this point, but I was shocked, in the sense that my nervous system jumped in the way I described.

I have no idea how a Black person would feel reading those comments. I can imagine that if I was a Black American, I’d be pissed as hell all the time, living with this white supremacy–because that’s what these comments are, you know. They indicate that middle-class white people have a normal standard that dare not be disturbed. If the standard, the routine, is disturbed, those responsible for the disturbance must be punished.

Six months after the Disappearance of the 43 students from the Rural Normal School at Ayotzinapa on September 26, 2014, the families are still searching for their children, for answers, and for justice. The students were attacked precisely because they were part of the rural educational system, a network of 17 schools across Mexico called normales, which trains students from impoverished areas not just to become teachers but to actively work for social reforms in a country where, as the parents say, “it is as if there is no government”.

On April 1, I had the honor of bringing Clemente Rodriguez Moreno, Felipe de la Cruz Sandoval and Anayeli Guerrero de la Cruz to Blacksburg, VA where they spoke in two classrooms and made a public presentation. I had the privilege of sharing meals and family photos with them, listening to them, and learning from them. I learned that Clemente’s son, Christian, loves folkloric dance and is interested in agronomy and is involved in researching  new forms of organic compost. I learned that Anayeli’s brother, Jhosivani, wants to study chemistry, loves soccer, and wants to do well so he can look after his parents. I learned from Felipe, a professor at the Rural Normal School, that he struggles to keep the students in school as the government has abandoned them and cut what little funding they gave so that the students and staff have to take on the burden of buying all their supplies, books, and seed to grow their food and raise animals. 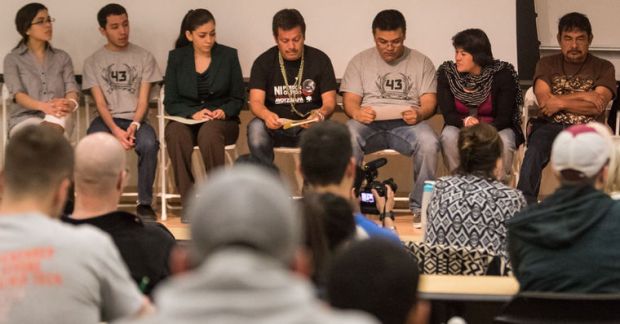 Relatives of the Ayotzinapa 43 speaking in Blacksburg, Virginia. Photo by Michael Shroyer.

The 43 students were part of an ongoing mobilization to demand funding for their schools, to demand the right to an education, and also were on their way to remember the Oct. 2, 1968 massacre in which thousands of students were beaten, jailed, and Disappeared as tanks bulldozed over Tlatelolco Plaza in Mexico City. There has never been a formal investigation into the killings. The case of the 43 students eerily echoes this painful silence as the investigation that was launched, which was only initiated after extreme pressure, was sloppy and full of contradictions, not a real investigation at all.

Professor Felipe De La Cruz commented that the events in Mexico may seem incredibly removed from our own experiences, but like the eye of a hurricane, there is calm amidst the storm. The storm is here and we will be swept up in it as well as the effects of the failed War on Drugs, Plan Merida, NAFTA, the escalation of Multinational control over our natural resources, and the inability for ordinary students to receive quality education catch up with us as well. He is correct. Pipeline fights, rising tuition costs, environmental degradation, and the fight for a living wage all point to the growing push for mobilization for social justice in our own backyards. Their struggle is our struggle. The connection is really not that hard to make.

Margaret Breslau has served as Chair for the Coalition for Justice for the past 11 years. The Coalition was founded in 1981 as a response to the Contra Wars, the US-backed “contra” counter-insurgency in Nicaragua against the left-wing government brought to power on the back of a popular mass movement from below. Since then the Coalition has expanded its mission and come to see that we are part of a larger human rights community where all people’s struggles for peace, justice, and dignity must be observed and supported. We are an organization that not only upholds the empowerment of people, but also the protection of the environment, as well as respect for cultural differences. We do so in solidarity with other volunteer and grassroots organizations, through education, and community involvement. Follow @justicebburg on twitter.