American society suffers from a profound clash of professed values and actual practices. We profess the value of education, but criminalize our children with a school-to-prison pipeline. We profess a love of liberty, but imprison unprecedented numbers of people, most for non-violent drug offenses, and the majority of those we imprison are people of color. We profess equality and security, yet our police departments operate as judge, jury, and executioner in the most disadvantaged communities–the ones that most need police officers to serve and protect. Those communities also need social services, yet social services are routinely cut in favor of corporate profits and privatization, and so the professed rights to life and the pursuit of happiness are compromised. 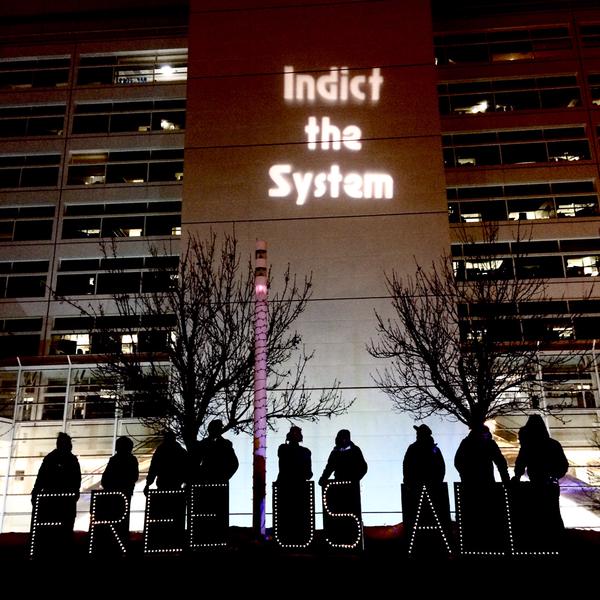 Chicago activists protesting criminalization of black youth at Cook County Detention Center on January 15, 2015 (photo by @MinkuMedia) Click image to read “Willing to Live for Our People”, about the young students who led the Chicago action

The roots of this clash grow from a contradiction at the core of our nation. The “unalienable rights” asserted in the Declaration of Independence have been denied, in some way or another, to African-Americans for the entire history of our nation. Unalienable rights, denied: a contradiction between the professed philosophy of the nation and its lived experience, its history.

This lived contradiction is similar to the notion of cognitive dissonance, the stress experienced by an individual who holds two contradictory beliefs. America professes equality, but practices inequality; this mismatch creates stress in America’s image of itself and in our public discourse.

American practices violate American ideals in the realm of foreign intervention, as well. Throughout American history, the nation has violated the sovereign rights of other nations: Cuba, the Philippines, Vietnam, Iraq, to name a few. While many apparently find it easy to dismiss military interventions as irrelevant to the unalienable rights of U.S. citizens, the professed philosophy of the Declaration of Independence is violated by foreign interventions that aim to subjugate populations to American interests.

Speaking on April 4, 1967, about his opposition to the Vietnam War, Dr. Martin Luther King, Jr. said that America had chosen to:

make peaceful revolution impossible by refusing to give up the privileges and the pleasures that come from the immense profits of overseas investments. I am convinced that if we are to get on the right side of the world revolution, we as a nation must undergo a radical revolution of values. We must rapidly begin the shift from a thing-oriented society to a person-oriented society. When machines and computers, profit motives and property rights, are considered more important than people, the giant triplets of racism, extreme materialism, and militarism are incapable of being conquered.

In 21st century America, King’s recommended revolution of values has never occurred. From the perspective of militarization and violent foreign intervention, our practices have changed little, and arguably worsened, since Vietnam. Our media is complicit. The propaganda drilled into the American people after 9/11 had a profound effect, obliterating the security that many Americans felt during the 1990s and replacing it with a climate of fear. The violation of reason, the lack of debate and a measured response perpetuated by the military-industrial complex after 9/11 created a climate hostile to democracy in America. The 21st century would be a very different time if, rather than rushing to war, the American people had been able to muster the political consciousness and will to approach the attacks with objective analysis, rather than reactionary patriotism. Questions could have been asked, foreign policy analyzed and revised; America could have wrestled with the contradictions inherent in a nation that has never been at peace with its professed values of equality and liberty.

In a country where King’s “giant triplets of racism, extreme materialism, and militarism” have never been conquered, and at a time when the reasons he cited for their continued tyranny are equally, if not more applicable than when he gave his speech, our ability to see the roots of our stress and discontent is obscured. In the pursuit of justice both at home and abroad, America must renounce an economics of consumption for a life of engagement. We must engage in a critical assessment of the ongoing national failure to actualize the ideals of “Life, Liberty, and the Pursuit of Happiness” that we declared on July 4th, 1776. We must undergo, as King declared, “a radical revolution of values” in order to engage in a correction of course that is long overdue.